To Alfredo H-S. Ang for notable and pioneering contributions to the development of rational safety criteria for the design of structures by applying probabilistic methodology and for his dedicated service to his profession. 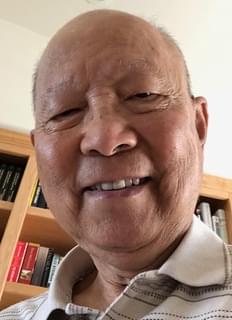 He is author or co-author of more than 300 publications and was senior author on a two-volume textbook, Probability Concepts in Engineering Planning and Design, which has been translated into several languages and adopted by major universities worldwide. An active teacher, he developed both undergraduate and graduate courses in probabilistic methods, lectured extensively, and organized seminars and short courses.

Ang extended his theoretical work to practical problems, including seismic hazard analysis, earthquake engineering, wind engineering, offshore structures, and life-cycle cost effectiveness in design criteria development including optimal design of complex structurest. As a consultant and technical adviser, he has served numerous governmental and industrial organizations, both in the United States and abroad.

His research work on safety criteria has had a major impact on engineering specifications and practice. He has served the American Society of Civil Engineers (ASCE) for many years and in many positions, including international director of the board and chair of several committees. He is also an Honorary Member of ASCE and has received the Nathan M. Newmark and Alfred M. Freudenthal medals, E. Howard Award, and numerous other awards from ASCE. He is a Fellow of the American Society of Mechanical Engineers and Associate Fellow of the American Institute of Aeronautics and Astronautics.

Since 1983, he has been the chair of the executive board of the International Conference on Structural Safety and Reliability. He also continues to serve as honorary consultant to the Chinese Academy of Building Research and distinguished visiting professor at the Institute of Engineering Mechanics,Academia Sinica, Harbin, China.Ang is a member of the National Academy of Engineering elected in 1976.

The Executive Board of ISRERM proposed to establish the Alfredo Ang Lecture in honour of Professor Alfredo H-S.Ang in June 2017. Given Professor Ang's leadership role in the development of ISRERM, the Executive Board of ISRERM felt that it is appropriate to host the Alfredo Ang Lecture as the lead lecture in all future ISRERM, starting with the 6th ISRERM. The Alfredo Ang Lecture will further strengthen ISRERM's position as one of the premium venue to share research and practice in this burgeoning field and would bring greater visibility to the body of work on how engineering contributes to the building of safer and more resilient communities.